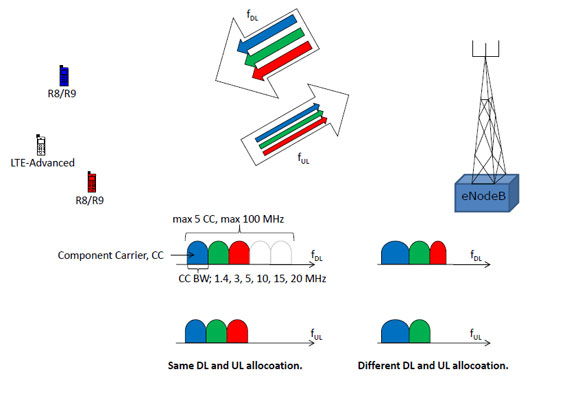 Figure 2. Carrier Aggregation; Intra-band and inter-band aggregation alternatives. The spacing between the centre frequencies of  two contiguous CCs is Nx300 kHz, N=integer. For non-contiguous cases the CCs are separated by one, or more, frequency gap(s).

For practical reasons CA is initially specified for only a few combinations of E-UTRA operating bands and number of CCs. To specify different CA combinations some new definitions are used:

In R11 a large number of additional CA configurations are defined, see table 2. The maximum aggregated bandwidth is still 40 MHz and maximum number of CC is 2. Note also that for both R10 and R11 any UL CC will have the same bandwidth as the corresponding DL CC. Also for inter-band CA there will only be ONE UL CC, i.e. no UL CA.

When carrier aggregation is used there are a number of serving cells, one for each component carrier. The coverage of the serving cells may differ, for example due to that CCs on different frequency bands will experience different pathloss, see figure 3. The RRC connection is only handled by one cell, the Primary serving cell, served by the Primary component carrier (DL and UL PCC). It is also on the DL PCC that the UE receives NAS information, such as security parameters. In idle mode the UE listens to system information on the DL PCC. On the UL PCC PUCCH is sent. The other component carriers are all referred to as Secondary component carriers (DL and UL SCC), serving the Secondary serving cells, see figure 3. The SCCs are added and removed as required, while the PCC is only changed at handover. 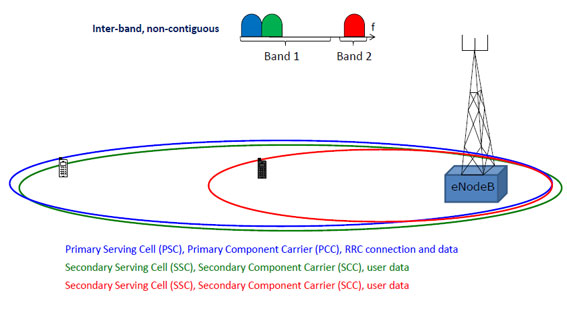 Introduction of carrier aggregation influences mainly MAC and the physical layer protocol, but also some new RRC messages are introduced. In order to keep R8/R9 compatibility the protocol changes will be kept to a minimum. Basically each component carrier is treated as an R8 carrier. However some changes are required, such as new RRC messages in order to handle SCC, and MAC must be able to handle scheduling on a number of CCs. Major changes on the physical layer are for example that signaling information about scheduling on CCs must be provided DL as well as HARQ ACK/NACK per CC must be delivered UL and DL, see figure 4. 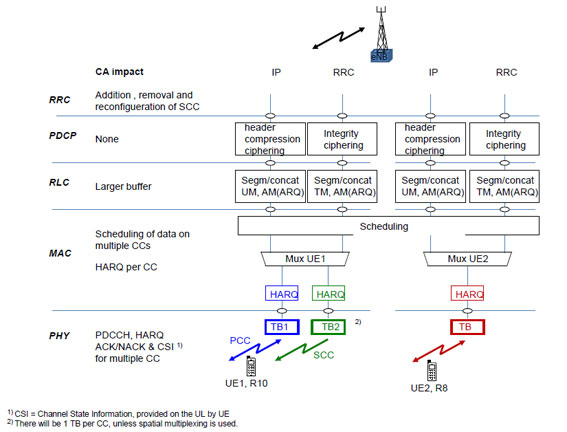 Figure 4. LTE protocols for the radio interface, with main changes due to introduction of CA

Regarding scheduling there are two main alternatives for CA, either resources are scheduled on the same carrier as the grant is received, or so called cross-carrier scheduling may be used, see figure 5. 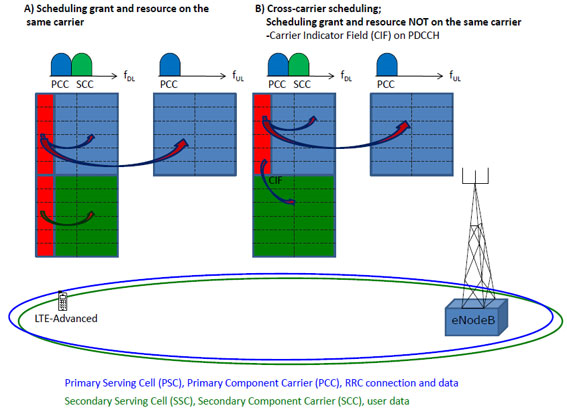 Figure 5. CA scheduling (FDD); Cross- carrier scheduling is only used to schedule resources on SCC without PDCCH. The CIF (Carrier Indicator Field) on PDCCH (represented by the red area) indicates on which carrier the scheduled resource is located.

For heterogeneous network planning the use of for example remote radio heads (RRH) is of importance. From R11 it will be possible to handle CA with CCs requiring different timing advance (TA), for example combining CC from eNB with CC from RRH, see figure 6.

See a new article on the website: Carrier Aggregation on Mobile Networks (August 2022)

Please send any suggestions and comments about this article to: , Kevin is responsible for marketing and communications for 3GPP. 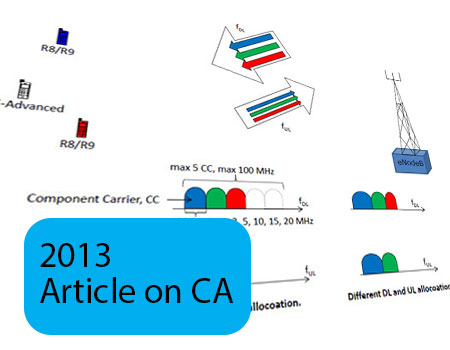