Carrier aggregation, where a terminal receives or transmits on multiple component carriers (frequency blocks assigned to the same user), is a key technique introduced as part of LTE Advanced from release 10 onwards. The main advantages are:

Carrier aggregation is a long successful story of both LTE/NR enhancement with new combinations of frequency band added in every release.

The following provides an overview of the CA technique evolution through the different 3GPP releases since its introduction.

The following is supported:

More detailed explanation is available in [1].

The following is introduced as part of the Work Item:

The objective the Work Item is to enhance LTE TDD – FDD joint operation with LTE TDD-FDD carrier aggregation feature and potentially also with other TDD-FDD joint operation solutions – see the outcome of the initial scenario evaluation phase in [2].

The following is introduced as part of the Work Item:

Note that Dual Connectivity (DC) functionality was identified as possible other solutions for FDD-TDD joint operation enhancement. In DC, the UE is simultaneously connected to two different eNB base stations (on different carriers) by aggregating flows of the two eNB despite the latency caused by the backhaul (X2 link). The base stations do not need to be synchronized (and therefore may not be co-located). Main difference with the aggregation of carriers where the aggregation of flows is performed on the same base station in two different radio bands.

(*): Primary cell (PCell) in which the device initially performs the initial connection establishment procedure. Once the device is in connected mode, one or more secondary cells (SCells) can be configured to provide additional radio resources.

The following is supported:

The following is supported in Rel-15:

As the users may not always require the high data rate provided by the NR wider bandwidths, NR defines the new concept of Bandwidth Part (BWP). UEs may operate in narrow bandwidth and when user demands more data, gNB to enable wider bandwidth. That makes NR an energy efficient solution despite the support of wideband operation.

EN-DC operation is introduced as part of the Rel-15, to support simultaneous transmissions across LTE and NR.

As part of Rel-16 NR radio enhancements, several configurations of CA have been introduced.

See a listing of all work & study items here:  https://www.3gpp.org/ftp/Information/WORK_PLAN/ and search for ‘LTE_CA‘ or ‘NR_CA’ in the acronym field of the Excel sheet there.

IMPORTANT NOTE: Please be aware that these pages are snapshot of the work going on in 3GPP. The full picture of all work is contained in the Work Plan (https://www.3gpp.org/ftp/Information/WORK_PLAN/) 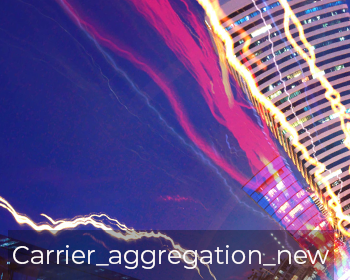