Edit the header to show the Working Group meeting details and the Tdoc number for that meeting. If the CR is revised, remember to change the Tdoc number on the revised version. For revised CRs, it is useful to include a line below the header indicating the previous Tdoc number e.g. "revision of S3-129786".

Include the TS or TR number only, with no preceding "TS" or "TR". Remember to include any leading zeros in part numbers, where appropriate.

Obtain a CR number from the 3GPP portal. Include leading zeros so that the CR number has four characters. Do not prefix the number with "CR" 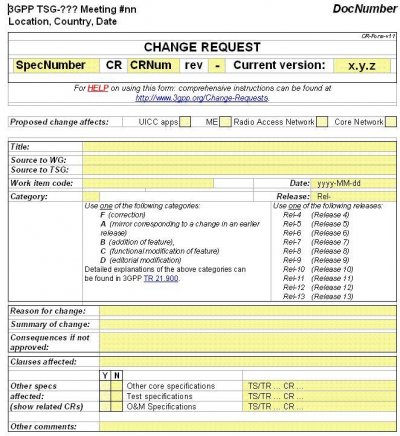 This field should originally contain a hyphen, signifying "revision zero". If the CR is revised subsequently to allocation of a formal CR number, this field should be incremented to show the revision. That is, the first revision (i.e. second version) of the CR should show "1" in this field, and so on.

This shows the version of the underlying TS or TR to which the CR is written. Ensure that this is the latest version (i.e. the version including all previously agreed CRs) in the Release in question. Remember that you need to produce an independent CR for each Release of the Spec you wish to modify. Under some circumstances (see general considerations below), the CR may actually be implemented to a later version than the one you indicate here. Always use numeric values for the version number fields. That is, if the current version number were 11.14.1, enter "11.14.1" and not "b.e.1" - the alphabetic extension is used only in the Spec's filename since only three characters are used for the whole, three field, version number in that context.

One or more of these field should be ticked (by entering an X) to indicate the area of relevance of the CR and its underlying Spec. Use the UICC field to indicate a change to the (U)SIM or ISIM application.

A descriptive title for the CR. Do not include redundant wording such as "Change Request to 3GPP TS 21.456 Release 4 version 4.19.0". Use the same title on all mirror CRs as used on the original CR, even if the text being changed is not quite identical in all cases.

The organization (3GPP Individual Member) responsible for drafting the CR. (May additionally include coordinates of the author for ease of contact in case of query). Where the CR is formally supported by two or more organizations, all should be shown.

Where the CR has been agreed by the Working Group responsible for the Spec concerned, enter the identity of that WG. In the expectation that the CR will indeed be agreed, you should fill this field in when initially submitting the CR to the WG.

Where the CR has not been agreed by the WG but is brought directly by an Individual Member to the TSG, the details should be as described above for "source to WG". This case is exceptional since the normal method of working is to get the CR agreed at WG level first.

When a CR which has already been agreed at working group level and is being presented for approval at TSG level is modified to cater for changes proposed during discussions at the TSG meeting, the "Source to WG" field shall remain unchanged. That is, it will still identify the organization(s) which proposed it at WG level even those this revision of the CR has never been addressed at WG level.

The "Source to TSG" field shall be changed to reflect the actual state of the modified document. That is, it shall be modified from the Working Group name to an appropriate source such as:

In addition, the following points are worth emphasizing for revisions of CRs:

any other changes implied by the nature of the revisions shall be reflected in the revised cover sheet.

Each CR must be justified by associating it with a work item, as used in the Work Plan. A full list of available WI codes is available. Use only codes taken from this list!

In the case of mirror CRs, you must use the same work item code for each Release’s CR. This will be the code pertaining the real reason for the change. The WI code chosen must have been valid at the time the earliest Release concerned was being drafted. That is, you cannot use a Release 6 work item code to introduce a change to a Release 4 spec!

Only use "TEI" (Technical Enhancement or Improvement) as a last resort. See the page on Work Items for more information on WI codes.

The "Source to TSG" field shall be changed to reflect the actual state of the modified document. That is, it shall be modified from the Working Group name to an appropriate source such as:

In addition, the following points are worth emphasizing for revisions of CRs:

any other changes implied by the nature of the revisions shall be reflected in the revised cover sheet.

The date on which the CR is written. Remember to change this field if the CR is revised. You must render the date in the format: yyyy-MM-dd that is, using the order year, month, day, using the hyphen character as a separator, and a four-digit year. Use leading zeros for month and day values less than ten. Other formats may not be correctly interpreted by the tool used to parse CR cover sheets to create their database records.

The categories are explained in TR 21.900 and on the cover sheet itself. For a CR to be considered a "mirror" of a CR to a previous Release version of the same Spec, it is not necessary that the revised text be identical to the original, merely that the intention of the change be the same. This reflects the fact that the passage of text in question may already have been subject to change in the later Release, and therefore identical changes cannot be wrought.

Indicate one (and only one) Release to which the CR applies. Remember that where a Spec is maintained in several parallel Releases, each needs a separate CR. Do not assume that the text of one Release version is the same as in another Release; write each CR from first principles, extracting the text from the correct base Spec.

The format for the text to be used is: Rel-4 or Rel-5 or Rel-6, etc. Use only these codes. Note that early Releases are "closed" - that is, no further CRs to Specs of those Releases will be entertained.

If a CR adds functionality for a new Release, and the Spec in question does not yet exist in that Release, enter the new Release but use as the "current version" the latest version in the previous Release. For example, a Release 11 CR to a spec which has no Release 11 version but which does exist at Release 10 (at, say, version 10.4.0) would show "Rel-11" in the Release field and "10.4.0" in the "current version" field.

Free text explanation of why the change is necessary.

Consequences if not approved

Free text describing the consequences of not approving the CR - for example, incompatibility between terminal and radio access network operation.

List all clauses / subclauses affected by the change. List each individual subclause: for example, if the CR affects clauses 6.1, 6.2, and 6.3, list these individually, do not write simply clause 6.

If the opportunity is taken to do minor editorial corrections to the Spec, the clauses affected should also be listed and the changes be indicated by revision marks in the usual way. The introduction of editorial changes on the back of a technical change is deprecated: it is preferable to provide a stand-alone CR (Cat D) for this purpose.

You must enter an X in either the Yes column or the No column for each row. It is not acceptable to leave these responses blank.

It is normally expected that CRs to those affected Specs will also be offered at the same time, so that the complete set of specifications is kept in step. Where known, also indicate the CR number(s) for the affected Specs.

This field can be used to record the changes to the CR as it passes from the original version to revision 1, revision 2, and so on. It is optional to provide this information, but it can be useful in the case of controversial changes to see what has already been tried.

When presented to the appropriate TSG for approval, Word™ files containing CRs are to be named as follows:

Square brackets indicate optional fields. Text in this font indicates characters which are to be rendered literally. The file type for CRs is discussed in the 3GPP drafting rules, TR 21.801, annex H §H.5.

Note that the field <WG_tdoc_number> (and its preceding underscore) are to be omitted if the CR has not previously been presented to the responsible working group. Note in particular that this field shall be omitted if the CR is modified from that agreed by the WG (eg if it is revised by email agreement following the WG meeting, or if it is revised as a result of discussion during the TSG plenary itself).

It is usual to package several related CRs in the same TDoc to the plenary TSG meeting, and the above convention helps quickly identify the relevant file for a given CR. The Zip™ file into which the CR .doc files are packaged must bear a cover sheet listing the included CRs. The Zip™ file itself is to be named according to the conventions laid down in the 3GPP Working Procedures.

Body of the CR

The body of the CR contains relevant extracts of the original TS or TR, with the proposed changes clearly shown using revision marks. Any added text must conform to the 3GPP drafting rules.

A CR pertains to one and only one underlying document. If a given Spec exists in several Releases, each must be maintained separately. If the modification you are proposing applies to all currently maintained Release versions, you must produce a CR to each of those Specs. By convention, a CR which is corrective in nature is applied to the earliest Release version to which it applies, and this CR is of category F. All subsequent Release versions have "mirror CRs" which are marked category A. Generally, a TSG will approve (or reject) all such CRs at the same time.

Sometimes a CR will actually be implemented on a version other than the one indicated in the CR cover sheet. This happens under any of the following circumstances:

Remember, the more accurate a Change Request is, the more likely it is to be approved, and the less likely the MCC Project Manager is to misinterpret it!