In the second of our post TSG#88e video interviews, Georg Mayer discusses the scale of the task to provide specifications for 5G and how many of the most exciting use cases will evolve & grow over two or three 3GPP releases.

He calls on new users of the 5G technologies to consider taking a role, to improve 3GPP features for the ‘verticals’.

Brian Dolby: Georg, you actually completed Stage 2 in the middle of last year, but the work went on, didn’t it?

Georg Mayer: Yes, 5G is a big endeavour that not only 3GPP, but the whole of the industry, is undertaking at the moment. 3GPP is the main organization writing the standards for 5G and we undergo the work my means of releases. When we started 5G, we were clear from the beginning that – as these releases are from 15 to 20 months long – that it couldn’t be done in one release.

We had Release 15, where we set the initial framework and then we said that Release 16 will bring it [5G] to its full beauty. Looking at it now, it is very clear that in Release 15 we looked at the smartphone evolution, we looked at how to give the current customers better service – more bandwidth, more reliability, security and so on.

The real kick, the real revolutionary thing with 5G is the ‘industrial revolution’ with 5G as a service enabler. That means that we are offering the 5G mobility platform, not only to smartphone users, but for a wide range of industries that can interconnect via our network.

That is obviously not something that we can do in one go. In the group that I’m heading (TSG SA), we looked at the basic requirements and at the architecture, which is the stage 2, until mid-2019. We continued in 3GPP [CT] – also in SA and in RAN – with pushing forward stage 3, for the protocols and those things you can implement – The coding, really the running code that we will give you.

These are the two columns that I see: The smart phone evolution, but then also the industrial revolution and the service enabling for the ‘verticals’.

In Rel-16, we have already started with some of these verticals on-board, including public safety (mission critical), car to car communications, we started projects for ‘factories of the future’ and we have continued our work on the internet of things (IoT) for massive machine type communication.

Release 16 is a big deal. What were some of the main issues you faced in your part of the organization (3GPP SA)?

The main focus was on getting these new players in. This isn’t just a technical issue, not like asking the manufacturing companies and the car companies to please tell us what you want. There is a lot more to do, there are social interactions that we have to take into account. One of the biggest barriers is the terminology or the language barrier – where people are using the same terms as we use in telecommunication, but they have a totally different view or background on them. We need to learn to understand and then to interact with each other.

I think that we have learned how to attract communities, from the outside, making it obvious to them what our system can give them. 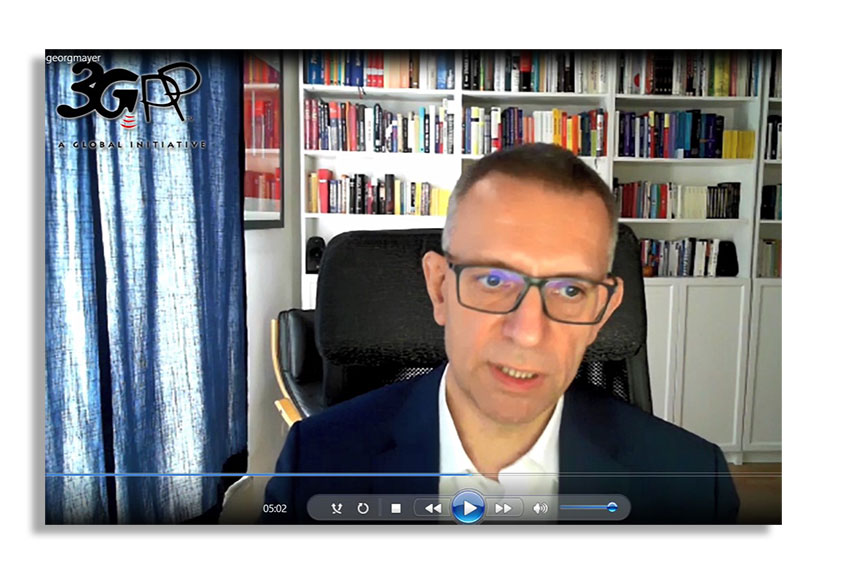 What we then did with 5G as a system, we completely revamped the mobile network as we know it today. We have a new network, a new architecture, that provides you with modern services. I would mention a few. One aspect is that we fully set our sights on virtualization, so all of the entities in the network, all of the resources in the network, can be instantiated whenever and where-ever they are needed and there is no need to pre-plan anything. Then, we have network slicing, where the operator can slice the network into logical entities.

These networks are completely independent of each other. As an example, the operator could rent the network to a car company, that wants to do testing with their self-driving cars or to a public safety organization – so that they can have communication on their own network.

The third aspect that I would like to tell you about, which is a very big step – on the Application Programming Interfaces (APIs). All of the information that we have in our networks now, can be communicated to third parties, to those communities like public safety. There can be interactions – this is a two-way street, where we went for a modern approach on restful interfaces, and so-on.

I think this shows that the challenge at the beginning was not just to have this platform available where everybody can communicate, but also to use technologies that are state-of-the-art and forward looking. I think we have good solutions at hand for deployments.

What about Release 17, what’s going on in that area?

Release 17 is the next step. People start to think that 5G is done now, let’s look into the future, whatever that might be. But, that is not really the case. We are developing our work, our standards in Release phases. In practical terms, you come to 3GPP with a great idea, you say ‘my factory should run on completely on 5G’, then we have to say; ‘yes, but this will take us years to implement. So, let’s break it down into smaller steps. We will give you something in Rel-16 and something more in Rel-17.’ This is the evolutionary path of the work that we have started.

We do the evolution of Edge computing, evolution of Slicing, of virtualization, of car-to-car communications, and so-on. All of the issues that are already there, will be enhanced. This shows that if your company is interested in these issues and you see that the work is now done by 3GPP, you can always bring your views. We usually work on these issues for several years and that is a guarantee that you can get involved in the work.

We are also looking to new issues. We have a lot of new players from the verticals onboard; broadcasters, satellite communication will be fully integrated, so it will be seamless whether you use 5G via satellite or on a terrestrial network. We will have communications between ships and ship-to-shore, we also have container communication. Then, we do network automatization … and lots of other cool things. We have a long list of features in the core network area, that are really promising and where people have already started work. Release 17 is fully on-the-go.

We have now started very early work on the requirements (stage 1) for Release 18, where we will see a similar approach as we had in Rel-17 – where we broaden the scope and also hardening some of the features that we have today.

With thanks to: Brian Dolby, Founder and CEO, Proactive International PR Limited for helping us to get this video made.