In a recent 3GPP webinar, Balazs Bertenyi – the TSG RAN Chair - discussed the current and future priorities for the radio groups.

Although the webinar is intended for people with some knowledge of how 3GPP functions and of the various working group’s working methods, we do hope that it could also be of interest to non-3GPP experts and other enthusiasts too.

Buried in the presentation are some important details of the work areas being considered by RAN – for Release 17. Balazs gives us an explanation why Release 17 will probably be on the ‘short’ side, spanning a mere 15 months. There is also a hint that the next release will complete some very important pre-normative studies on 5G NR in spectrum above 60GHz. He also gets modest on 3GPP’s impact on the future of AI.

Here are some [text] highlights: 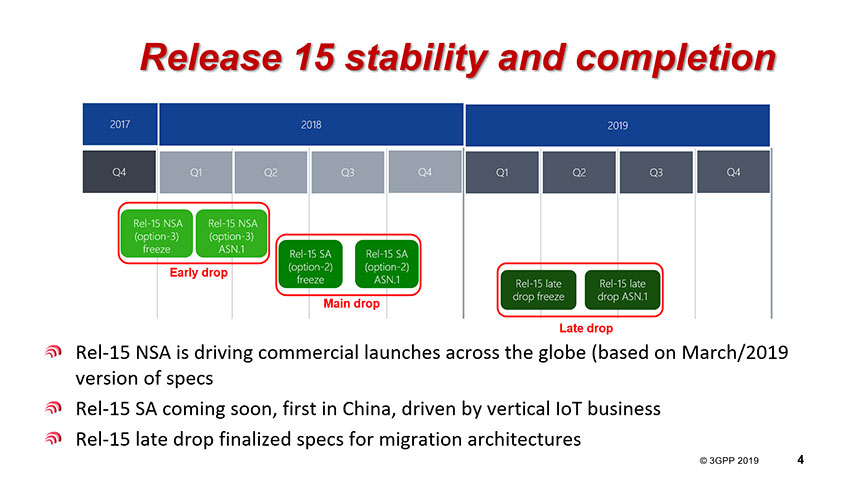 "The time plan for Release 15 included three distinct drops, focusing on NR Non-standalone, NR Standalone – delivered in the middle of 2018 – with its 5G core and 5G radio. The last edition was the late drop, just recently completed in June 2019, by the completion of the migration architectures, to help operators to migrate from LTE to a 5G based system.

Looking at deployments, so far, those are all based on the NSA architecture (at June 2019). Based on very stable NSA specifications, primarily the March 2019 versions of the specifications.

With respect to the Standalone, which is also coming soon, this is being driven by the vertical’s IoT business. We will see this in China first – very soon." 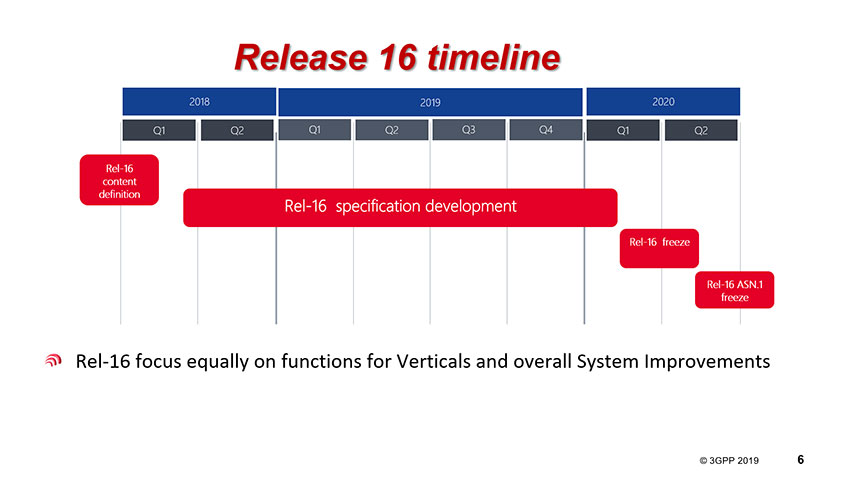 "On Release 16, the content of the release was defined in June 2018 and now we are in the middle of the specification development – aiming at freezing the physical layer part by March 2020, with radio protocol specs frozen (ASN.1) by June.

The Rel-16 focus is balanced between the needs of verticals and the need for overall improvements." 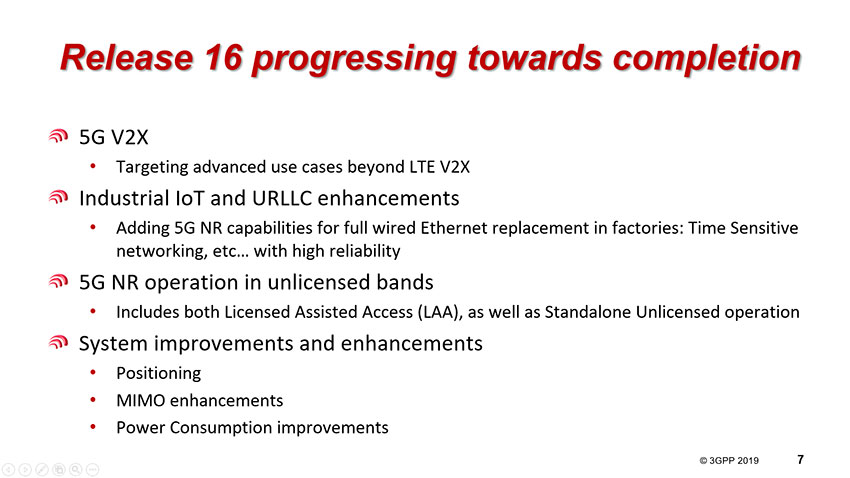 "For the verticals, there are three distinct pillars that we are focused on: Automotive, Industrial IoT and Operation in unlicensed bands.

For 5G based V2X, which builds on the two iterations of the LTE-V2X, we are now adding advanced features – primarily in the area of low latency use cases.

The second focus is industrial IoT and URLLC enhancements. Factory automation, in particular, is a strong pillar for 5G going forward. We are trying to ensure that the radio side covers all of the functions that all the verticals need for factory automation. What this means in practice is that we are trying to make sure 5G NR can fully replace a wired ethernet – currently used – by adding time sensitive networking and high reliability capabilities.

The third pillar is operation in unlicensed bands. We have seen different schemes for generic 5G licensing strategies in Europe and in other parts of the World. We have seen in some countries that certain licensed bands have been allocated for vertical use cases, though that is not the case for a majority of countries. The use of unlicensed bands provides a great opportunity – where licensed spectrum is not an option. We are now focused on not only what we have with LTE, which is the licensed assisted access scheme, but also on standalone unlicensed operation – to be completed in Release 16. 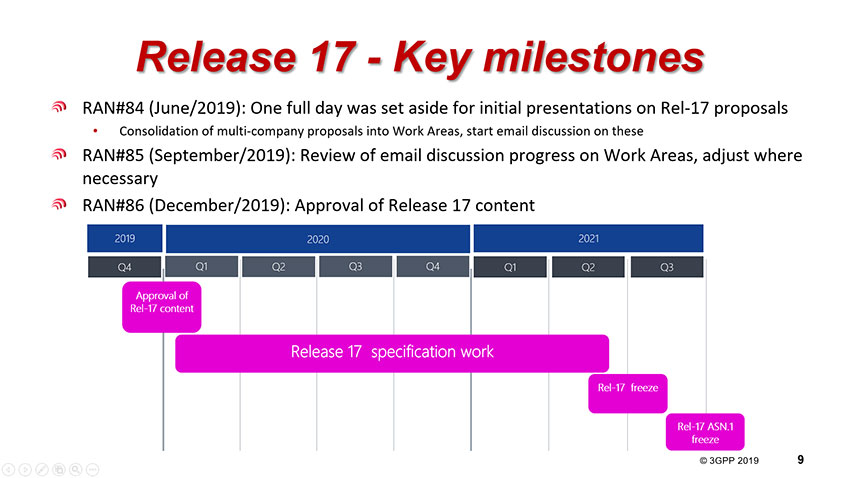 "Release 17 is in the planning stage. At our last meeting in June, 2019, we had a full day of the RAN Plenary dedicated Rel-17 proposals on the development of the 3GPP system evolving, from 60+ member companies.

We will conduct email discussions on the consolidation of the proposals in to work areas.

The email discussions are on open email lists.

The next step will be to review progress on the work areas – at the June meeting.

By December, 2019, we will decide on the release 17 content. One thing to remember, is that there are a large number of work areas to be discussed. Realistically, we will only be able to take on board a sub-set of them – about 20-30% of the work areas and functionality within them will make it in to Release 17.

The mainstream specification work can start at the beginning of 2020, until the functional freeze of the physical layer aspects in the second quarter of 2021 and the ASN.1 freeze will be done in September 2021.

As you can see, and compare to the Release 16 schedule, this means a 15 month release. If you go back, the length of our releases mostly fluctuates between 15 – 21 months. This is on the shorter end…primarily because there is so much pressure to bring up new features, as 5G commercial deployments become available." 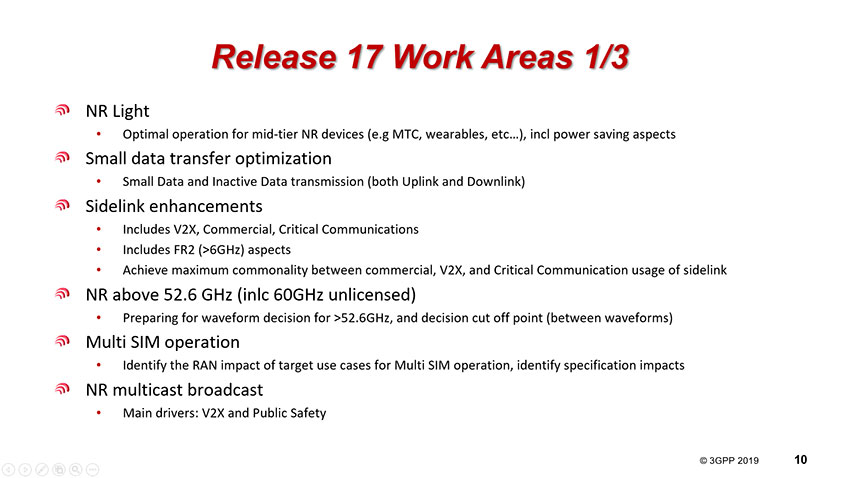 "Going in to the work areas. There are a high number here, on the one hand there are a number of items that are new, but also a number where we have already specified some functionality, in earlier releases, to be expanded on in Release 17.
A new one is NR light – this is a mid-tier NR functionality, for example, for higher end MTC devices like security cameras and for wearables. We will also look at power saving aspects for these devices.

‘Small data transfer optimisation’ has been looked at in the past, it is a very well defined area – So, we will be looking at how to optimise with the IoT use case in mind, both in the uplink and the downlink direction.

‘Sidelink enhancements’ for the direct communication between devices, this is primarily used for the automotive use case, as well as for critical communications, but there is also a push towards using sidelink for commercial use between smartphone directly. We will also look at both lower and high frequency aspects, including Frequency Range 2 (FR2) above 6GHz.

With release 15, we were looking at frequency bands up to 52.6 GHz, now with Release 17, we would like to extend that across 52.6 all the way up to 114 GHz and we will do a thorough study on the potential wave forms. Looking first at where the current wave form stops – does it stop at 52.6 GHz or does it go a bit higher? These are all discussions that we have ahead of us. In general we will do the study in Rel-17 and do the normative (specification) work in Release 18.

‘Multi SIM operation’, there are many multi SIM devices out there, but there are a couple of areas where standards could help this eco-system. We will look in to that, to understand the RAN impact and we will identify the specific functionalities to go in to the specs.

‘NR Multicast broadcast’ – key drivers are V2X and Public Safety, so we haven’t done any specific multicast work for NR yet. We will see in the discussion whether there is a good set of functions that can be taken on in Rel-17." 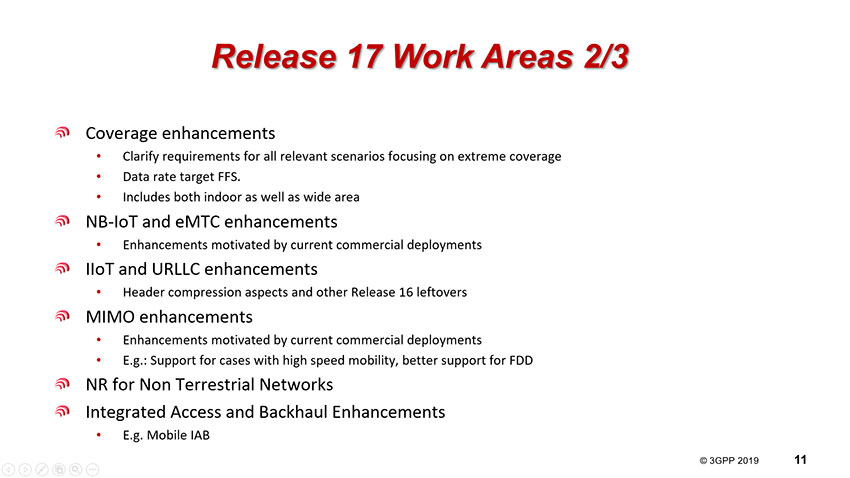 "‘Coverage enhancements’ is especially important in countries where extreme coverage has been an issue (China, India, Australia are examples).

‘NB-IoT and eMTC enhancements’ will be further evolved, allied to the new group of more advanced work on IoT devices – we still evolve these.

‘Industrial IoT and URLLC enhancements’ are one of the key pillars for Rel-16, but as the work progresses new requirements will come in.

For non-terrestrial networks, we have understood the requirements and different layer 1 implications and solutions and then we can take that forward with Release 17." 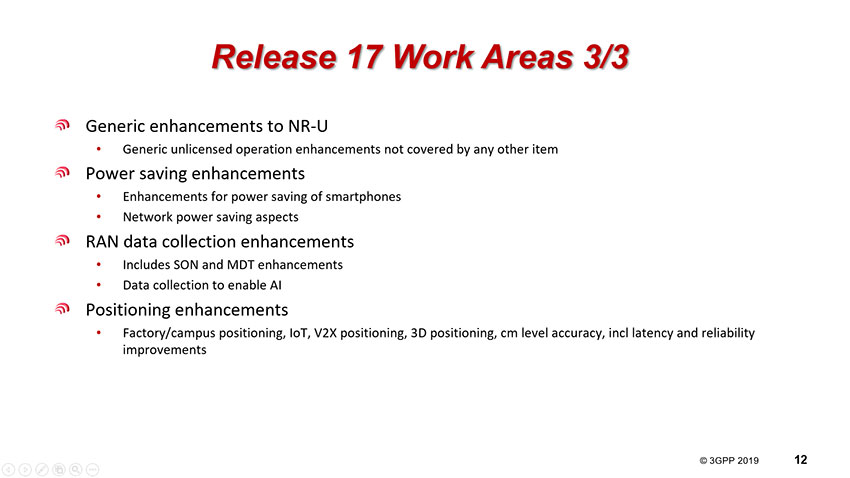 "The last slide on the Rel-17 work areas, includes some areas such as Generic enhancements to NR-Unlicensed operation, Power Saving – which is already on our plates in Rel-16, there are a lot of different schemes being discussed, both on the physical layer and on the protocol level. As you know, power saving is a critical piece of the system and I do expect that we are going to continue working on this in Rel-17.

'RAN data collection enhancements', doesn’t only focus on SON and Minimalization of Drive tests (MDT) – We will also look at ‘data collection to enhance AI’. For AI, we haven’t in 3GPP identified much that we have to do, other than data collection.

On ‘Positioning’ we are doing 10s of CM accuracy in Rel-16, so we are looking at enhancing that, looking at Factory/Campus positioning, V2X, 3D positioning (looking at vertical and horizontal), as well as CM accuracy and latency and reliability improvements." 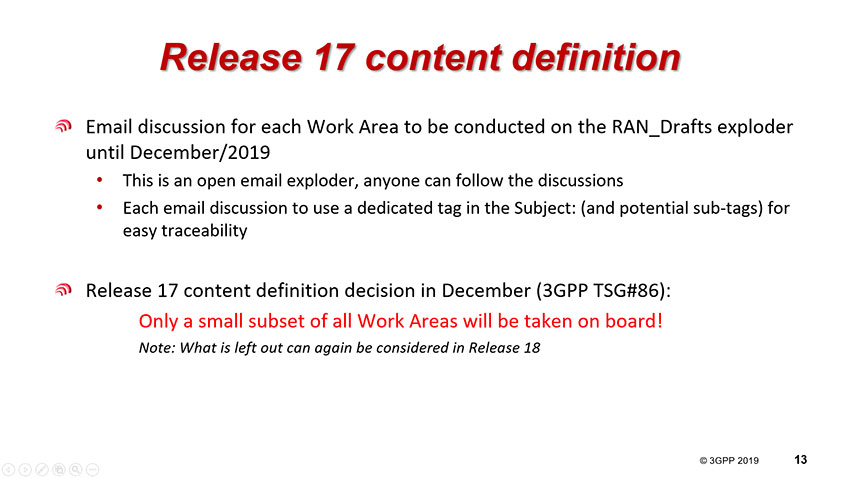 "All of the Rel-17 Work Areas have their own email discussions on-going and if you are interested in joining any of these, please join in.

When it comes to the December Rel-17 content definition, only a sub-set of these work areas can make it, 3GPP has a certain bandwidth in terms of what the Working Groups can deliver…we will do the exercise in December of what stays in. Items left out will be considered for Rel-18." 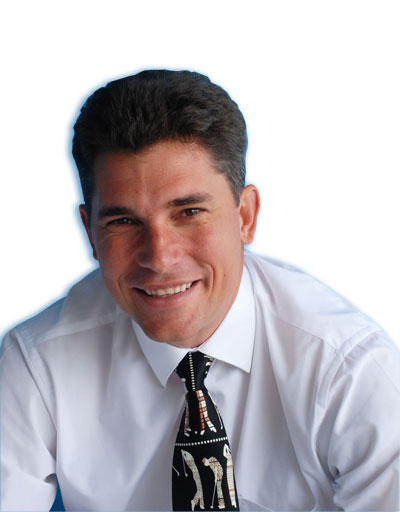