Imagine that you operate a large-scale airport and you want provide good quality mobile connection. You may choose to build your own mobile network, "rent" some of the mobile operator's or ask the mobile operator to build/provide one for you. This is what a Non-public network (NPN) is.

NPN, also referred to as a private network, is a network that is intended for the non-public (or private) use. Whilst the concept has been implemented in previous generations, 5G specifications support various configurations of NPN. This page describes the technology and relevant 3GPP work.

The 5G system needs to cater to a variety of use cases, spanning a range of requirements including the ones that were not traditionally served in the past generations. For example, some use cases require the data used to stay within the boundaries of the organization, to protect privacy and resolve security concerns. In such cases, some (if not all) of the network entities need to reside locally in the organization's premise and/or be owned by the organization. Indeed, the non-traditional (i.e., vertical) use cases and organizations that have not used mobile connectivity for its private use tend to come with these new sets of requirements, requiring NPN to be deployed.

For these use cases, the NPN may provide three benefits in terms of performance. First, NPN brings optimized coverage for the owner as the network is deployed for the owner's purpose and not for the public in general. Second, the local presence of some network entities reduce physical distance and number of network hops required for the use case, reducing the latency of NPN. Finally, the local presence reduces uncertainty of network operation, as the disruption (e.g., outage, fault) of the corresponding entities can be managed/resolved inside. Note that the benefits may not be significant (or non-existent) depending on the deployment architecture.

NPN also enables more control from the owner's side in general. The security of the network can be enhanced by restricting unauthorized users and the privacy of the data treated can be enhanced. In addition, traffic can be prioritized depending on the types of users in the organization as per its requirements. Similarly, management of congestion and interference can be optimized according to the requirement of the organization.

The definition of non-public network is a network that is intended for non-public use. It can be deployed in a variety of configurations where both virtual and physical network elements can be utilized. It includes the concept of private network, which is an isolated network deployment that does not interact with a public network. While there are many possible configurations of NPNs, 3GPP defines two major categories of NPNs: Standalone Non-Public Network (SNPN) and Public network integrated NPN (PNI-NPN).

In one extreme, there is SNPN, which refers to an NPN that does not rely on network functions provided by a Public Land Mobile Network (PLMN), mobile network operator in simple words. SNPN deployed in isolation corresponds to the concept of private network and it indicates that SNPN involves more investment and commitment from the owner. In the other extreme, there is PNI-NPN, which refers to an NPN that is deployed with the support of a PLMN. PNI-NPN may be deployed as a private slice (dedicated network slice by the PLMN for the sole use of the owner), or it may involve part of the networks being deployed by the PLMN and others by the owner.

There are many configurations in the spectrum of the NPNs from the isolated SNPN to PNI-NPN in the form of private slice. For the information of the reader, this document/page provides the four major scenarios of NPNs as identified by 5G Alliance for Connected Industries and Automation (5G-ACIA).

The first scenario is SNPN, where all network functions are located inside the defined premises of the organization and the NPN is separate from the public network. 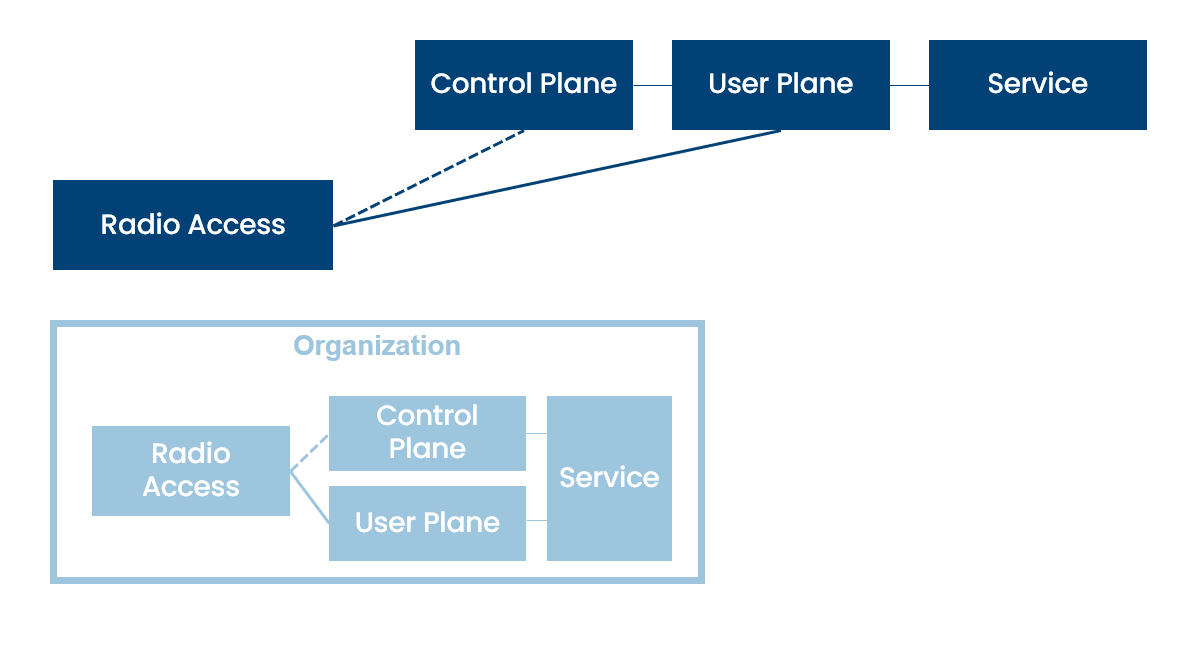 The second scenario is PNI-NPN with shared Radio Access Network (RAN), where part of the RAN is shared among the owner and the mobile operator. All other network functions are segregated as in the case of SNPN. Note that with this scenario, the NPN data resides within the defined premises of the organization. 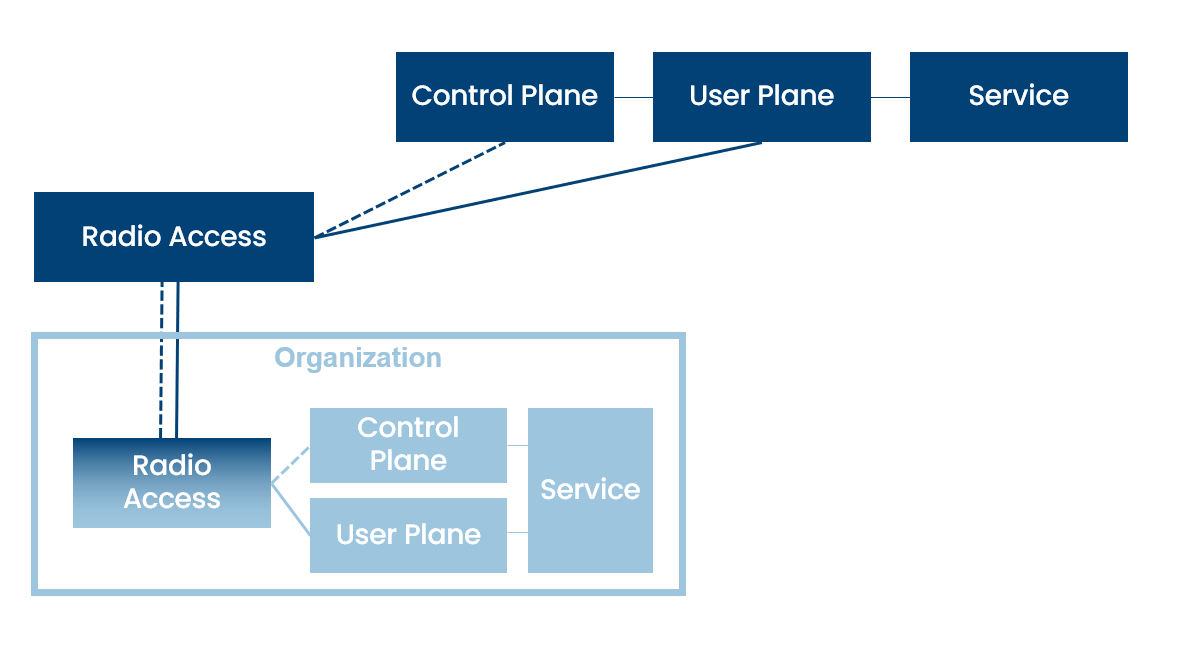 The third scenario is the deployment with shared RAN and control plane, where not only the RAN is shared but also the network control tasks are performed by the public network. Note that the NPN data still resides within the defined premises of the organization. This scenario can be implemented by the means of Access Point Name (APN) or network slicing, where a network slice can be dedicated to the owner of the NPN. 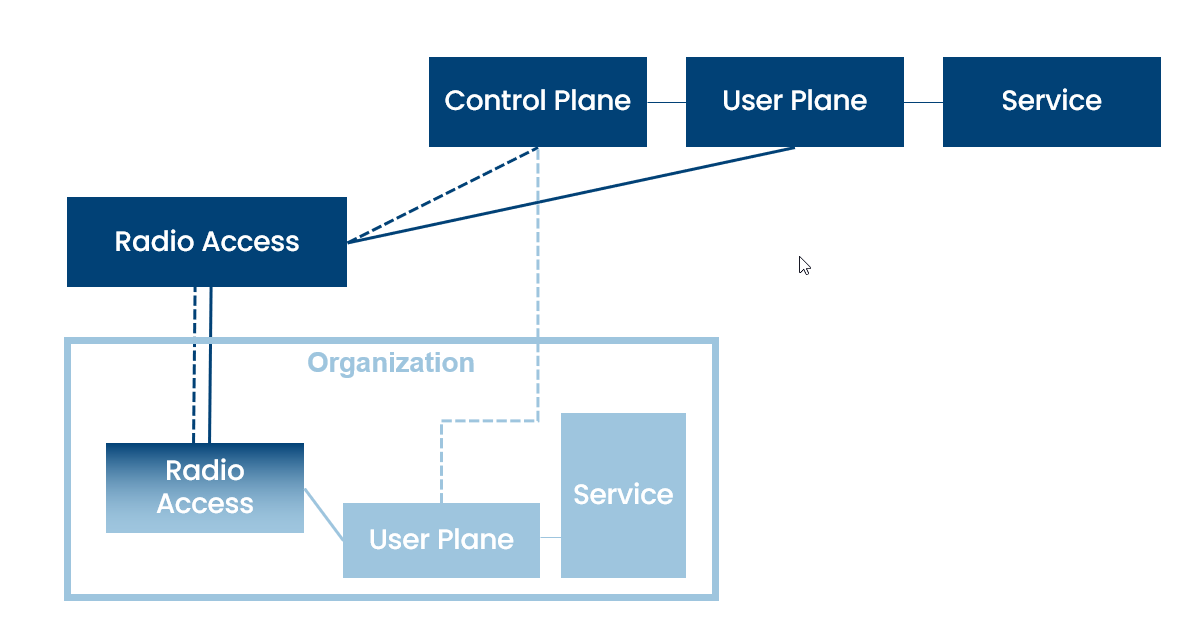 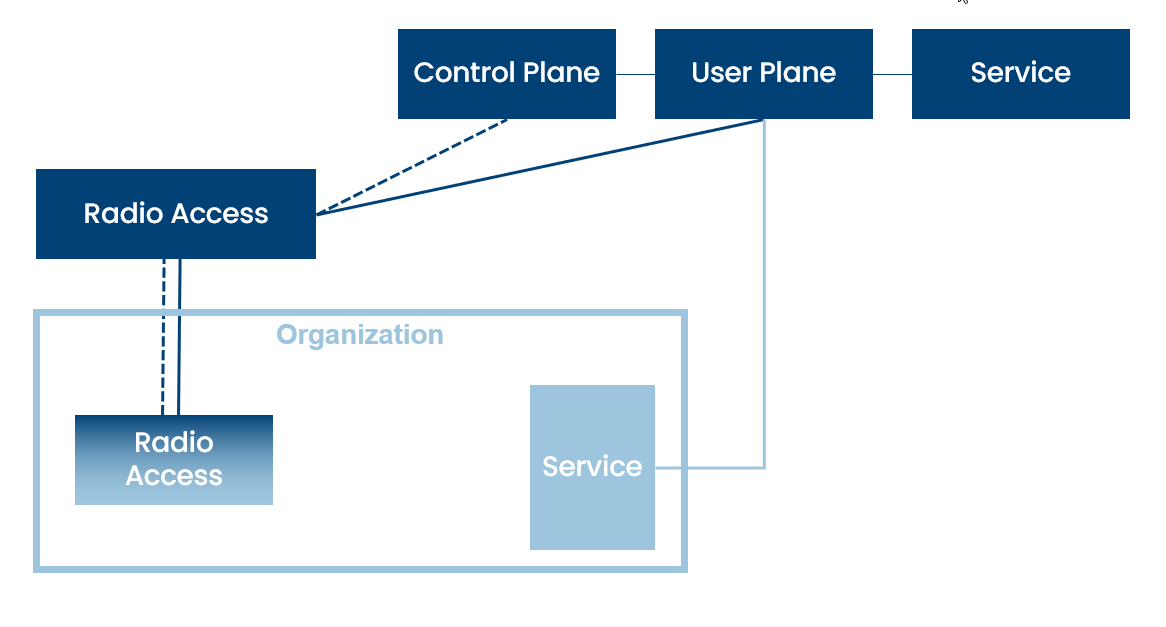 The standardization of NPN in 3GPP started in Release 15. The SMARTER work item, which aimed to specify the requirements in order to enable the new services and markets, covered the concept of private network in its target specification 3GPP TS 22.261.

In Release 16, the work on NPN was distributed among a few work items. Service requirements for cyber physical control applications in vertical domains work item covered the concept of NPN in the service requirements of ultra-reliable and low end-to-end latency applications. Work item on enhancements to 5G System to support vertical and LAN services specified enhancements to satisfy the requirements set by cyber physical control applications work item. Corresponding work was done in the RAN with private network support for NG-RAN work item. While not normative, study on management of NPN started in this release, setting the foundations for the normative work for the management in Release 17.

The work on NPN was more consolidated in a single work item eNPN (enhanced support of Non-Public Networks). Within the eNPN, further system enhancements to support NPN requirements were specified. For example, supporting SNPN along with credentials owned by a separate entity and onboarding & remote provisioning of the device. Other features, such as the support of audio-visual service production over NPN, IMS (IP Multimedia Subsystem) voice and emergency support for SNPN, and PWS (Public Warning System) support for SNPN were also specified. Corresponding work was done in the RAN with enhancement of private network support for NG-RAN work item. This release is where the normative work for the management of NPN was done.

Currently in Release 18, studies to enhance the NPN and related aspects are under way. The phase 2 of NPN eNPN_Ph2 is investigating solutions to fully address UE onboarding requirement. For example, case with many to many relationship. In addition, possible charging scenarios and corresponding requirements is being investigated. Support of end-to-end network management taking into account SNPN and PNI-NPN, and security impacts of supporting localized services are also being investigated by 3GPP.

In Release 16, the concept of NPN was formally introduced into normative specifications. The Release 16 work included stage 1 to stage 3 across all 3 TSGs (RAN, SA, and CT). First, previous definitions of private network were harmonised within the definition of NPN. In addition, the requirements for NPN, including security and privacy, was specified.

Second, enhancements were introduced to the 5G system to support non-public networks. Namely, network identification, discovery, selection, and access control for NPNs. Network ID (NID) was introduced to identify, discover, select, and control access to SNPNs. Any SNPN can be identified by a combination of PLMN ID and NID. The concept of Closed Access Group (CAG) was also introduced to identify a group of subscribers that are permitted to access the relevant cells in the context of PNI-NPN. Since network slicing does not prevent subscribers from accessing specific cells, CAG was introduced to prevent "unauthorized" users from accessing a given cell at all.

Finally, there were enhancements to enable access to public network services via SNPN and vice-versa. Mechanisms similar to those of non-3GPP accesses were employed for this purpose. Basically, the accessing network accesses the target network by connecting to the target network's N3IWF. Just as connection from UE via non-3GPP access is done via N3IWF of the PLMN, the SNPN/PLMN accesses PLMN/SNPN services by connecting to the N3IWF of the PLMN/SNPN in concern respectively.

From Release 17, the 3GPP work focused on enhancements to NPN to fully cater to the defined requirements. The first major enhancement was supporting a UE to select a particular SNPN when the UE has credentials owned by a separate entity (called Credentials Holder: CH), whether it is a separate SNPN or other PLMN. This is introduced such that the subscribed network (PLMN or NPN) can steer the connection of its subscribed UEs to a particular visited PLMN or NPN (other than the subscribed one), enabling the subscribed network to steer network selection based on its priority (e.g., business arrangements).

Third major enhancement came from the support of regulatory requirements for NPNs. Some markets require, by regulation, to support public safety services such as emergency calling and public safety warnings. While PNI-NPN relies on public networks which satisfy the requirements, SNPNs do not have other entities to fall back to. Therefore, normative works to enable support for IMS voice and emergency services in SNPNs. In addition, support for PWS to push public safety warning to the public on SNPNs was specified.

Finally, there were other aspects of NPN described in the Release 17 specifications. Informative guideline on using and exploiting the existing Release 16 version of NPN specifications for the purpose of professional media applications was created.

Release 18 and looking ahead

Release 18 is beginning and NPN is no exception. Before the normative work, 3GPP is, as of August 2022, conducting studies to investigate potential requirements and solutions. This includes solutions to support non-3GPP access (e.g., WLAN), to support mobility between SNPNs without new network selection, and to provide access to local services. The last includes features such as enabling localised service provider to interact with NPN to provide local services.

Another important aspect being studied is charging. While using SNPN locally for an organization's proprietary use (i.e., private network) would not require complex charging features, interaction between various entities inevitable raises potential charging scenarios and requirements. For example, interaction between SNPNs, SNPN and mobile network operators, SNPN and CH, PNI-NPN and SNPN, and of course PNI-NPN and mobile network operators. Therefore, 3GPP is studying various charging scenarios and requirements, along with potential solutions to resolve these.

3GPP is also studying to enhance management and security of NPNs. The management study includes end-to-end network management, including RAN and CN (Core Network) domains, in NPN scenarios, cooperation between 3GPP and non-3GPP management systems, and management of capability exposure for various types of NPNs. In the security perspective, security implications of the new NPN features are being studied. For example, support for mobility between SNPNs, support for non-3GPP, and enabling of localised services for NPNs.

NPN has been continuously evolving in 3GPP. Starting from the concept of private network, the 3GPP standards now support various types of NPNs ranging from isolated SNPN to PNI-NPN in the form of dedicated network slice for the customers. Stay tuned with 3GPP for additional features of NPN.

See a listing of all work & study items here:  https://www.3gpp.org/ftp/Information/WORK_PLAN/ and search for ‘ACRONYM’ in the acronym field.

TR 28.828 on "Study on charging aspects for enhanced support of non-public networks" (from Rel-18)

NOTE: some work items include non NPN related CRs and caution needs to be taken in viewing the CRs of these work items.

IMPORTANT NOTE: Please be aware that these pages are a snapshot of the work going on in 3GPP. The full picture of all work is contained in the Work Plan (https://www.3gpp.org/ftp/Information/WORK_PLAN/) 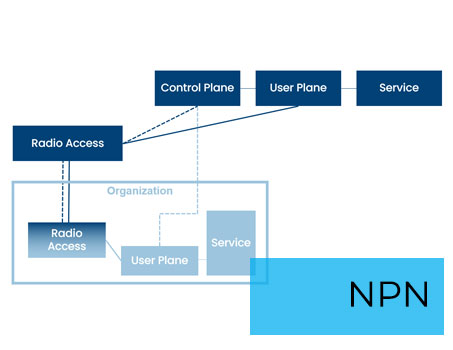